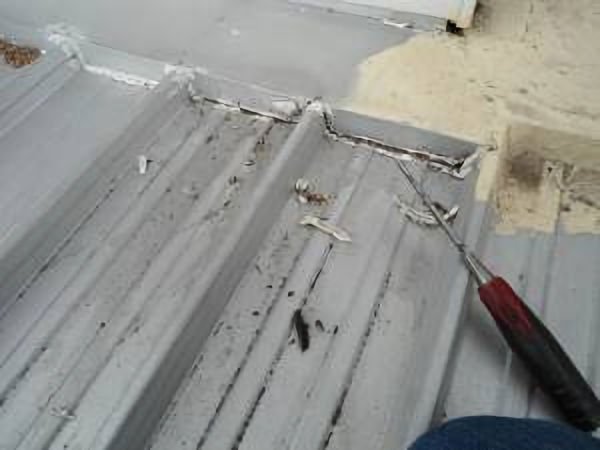 Many roofers in Sydney ignore the basic rules about flat metal roofs and as a result, we get to repair a lot of leaks in the Inner and outer west of Sydney – where a lot of kliplok roofs reside

Kliplok profile metal roofs are more expensive than the more common corrugated and “Trimdek” profile roofs. So why do we have to use Kliplok roofs?

When the roof design calls for maximum internal headroom restrained by roof height.

This calls for a roof as flat as possible and Kliplok can be used on roofs with a slope a low as one degree. But even though the manufacturer has done all they can to make the roof sheeting work on such a flat roof, it is still up to the installer to use the right techniques.

The basic rule that MUST be followed is to: Turn the upstream ends up and the downstream ends down.
Great care must be taken on the upstream end because this is the end that is more prone to water leaks. The most common problem is in the detailing of the upturn. A special upturn tool should be used and the upturn should be as high as possible. Otherwise water in very heavy rain will overflow the upturn and cause a leaking roof.

…And because the upstream end of the roof is usually covered by a tile or transition/apron flashing, the faulty upturn is hidden – making a roof repair more difficult.

So, instead of finding out exactly where the upturn problem is, many resort to sealing the kliplok flashing to the metal roof sheeting with silicone or some other sealant – and they think that they have done a smart roof repair. In theory, this may seem like an effective way to stop the water from entering the upstream end of the kliplok roof.

However, for this to work, the sealant work has to be 100% water tight to begin with, and must remain so for the life of the roof. This is an almost impossible task for the sealant applicator, and impossible for the poor silicone sealant which has to withstand weather and the odd pedestrian traffic putting stress on the joint.

To repair the leaking kliplok roof effectively, the covering roof flashing must be removed and the faulty upturns repaired adequately.

16 responses to “How to trace a leak at a Kliplok metal roof flashing.”