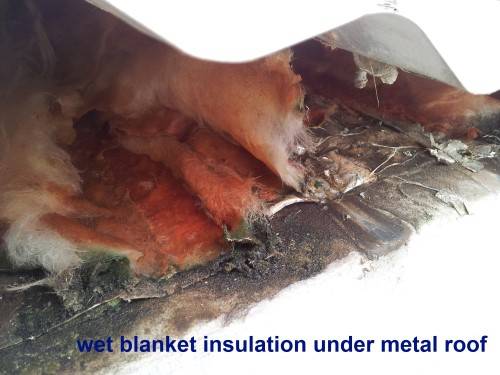 Most new metal roofs now have a layer of blanket insulation installed underneath. It is a nice handy way to insulate the roof cavity and also cut down on a bit of ‘rain noise’.

One of the reasons that corrugated roofs are not suited for low pitch applications is the ‘dribble effect’.

The ‘dribble effect’ is the tendency for the rainwater to hang around the downstream edge of the roof sheet and dribble underneath. It can run backwards under the trough quite a bit – especially if there is wind involved.

The gutter on the roof has to be wide enough to catch the dribbles and prevent it from going into the roof cavity – and when this is the case, the roof does not leak.

The exception is when there is an anticon building blanket insulation involved.

I was taught to always to cut the blanket insulation well back from the back of the gutter. I thought it was just to save on materials – until I discovered the real reason why…

… If the water dribbling under the roof sheeting manages to meet the end of the building blanket – a funny thing happens. Capillary action sucks the water up into the blanket and soon the blanket insulation is soaking wet!

The wet insulation seeps water into the lap joint of the insulation blanket and drips over the edge into the ceiling cavity – causing a leak that will baffle most roofers.

AND also the wet blanket insulation starts to dry off under warm weather and ‘steams’ the underside of the roof sheet. Premature corrosion commences and the life span of the metal roof is drastically shortened… even the roofing screws rust away.

This is one of the dangers of using corrugated roofing on low pitched roofs.

Recently, I was called out to a  roof in a Inner West suburb of St Peters, Sydney – because there as a leak that could not be tracked down. As the video below shows, it was a typical case of a flat metal corrugated roof with wet blanket insulation underneath

Thank you for sharing your tips, they are very handy for people to know. Insulation can be a great addition to commercial and residential properties, but it does need to be installed correctly otherwise, as you have pointed out, it can lead to other damage which may not be immediately noticeable. It pays to do some research on what you are looking for and speak to as many professionals as you can.

Thanks for your advice on this. We are having extensions done now, and have a flat corrugated roof. We aim to install blanket insulation. Considering the problems that can occur, should we go ahead ? Or can it be installed in a way that leaks will never occur in a flat metal roof ?

It is quite simple.
Do not use corrugated roofing on a flat roof extension. Corrugated roofing is not suitable for any roof that has a pitch of less than 5 degrees.
Instead, install a kliplok profile roof which can be installed as flat as one degree.
Trimming the blanket insulation to the correct length and turning down the downstream ends of the kliplok roof sheeting will stop wet insulation from happening.

All the best for your new roof extension.

Thanks for the informative video. Now I know what is causing our leaks. In terms of correcting the problem, can I just push the roof blanket back so it is farther from the edge of the roof?

Hi Steve,
Yes, pushing the blanket back will work – although, it sometimes has a bad habit of popping back out again like a bad Haemorrhoid…
Best to get a stanley knife to the excess length and trim it right off.
Hope this helps.

Thanks for the important info.
I’m building my own studio shed. I have roof frame, then 12mm plywood, then covered with sarking.
1) Do I need wooden rails running along to screw my roof on, or can I just screw to the roof frame through the plywood?
2) Do I need the layer of the blanket under the metal roof, if I already have 140mm thick insulation under the 12mm plywood, from the inside?
Your advice is much appreciated.

My video on the project for more details: https://www.youtube.com/watch?v=pid8GvaHdFE

P.S. Can you quote me to install my roof if I think it is beyond my capacity?
Thanks.

Looks like you are quite a handyman and you should be able to put the roof on yourself.

I would suggest installing roof battens (either metal or timber) on top of the ply. Then a 55mm building blanket over the battens before you put the roof on.

Hi Darren,
We normally take the building blanket up to the last batten adjacent the gutter – making sure that it is not too long and draping into the gutter.
I can understand that sometimes the blanket may be just short of the last batten (in an attempt not to have the blanket too long) and the end section will fall down onto the eaves.
It is just a bit of careless work and it may not cause you any problems – depending if you get condensation on the eaves or not.
We have found that the best way to prevent condensation is to have the blanket very close to the underside of the roof sheets.

thanks for the informative video – well presented. I am just having my metal roof quoted and will be sure to ask the contractors about this issue to avoid problems.