Why is my ceiling mouldy?

If you have an ugly mould area in an isolated area of your ceiling – along with brown staining, then you probably have a roof leak. 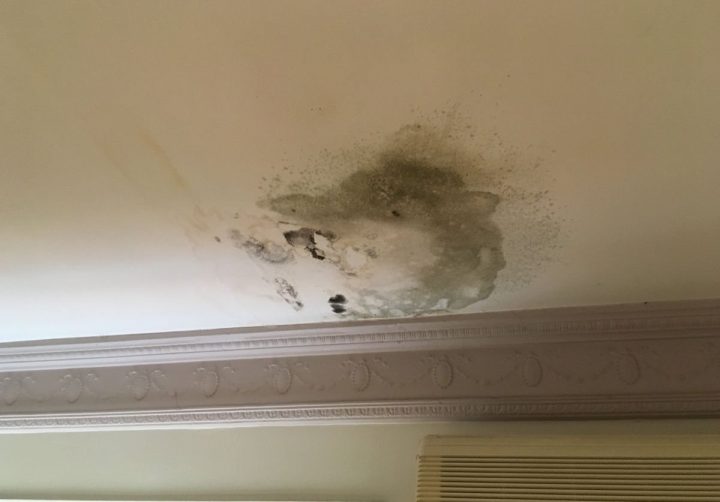 The brown staining is the fine dust on your ceiling that has been dissolved by the rain water and is leaching through the plaster. The mould is because the ceiling is damp (usually due to the ceiling insulation getting soaked by the roof leak).

If there is just BROWN staining, it is not mould – because mould is a grey colour. When there is an occasional roof leak, the ceiling gets wet for a short while and causes a brown stain. But the ceiling usually dries rapidly before mould spores have a chance to grow on it.

The rule of thumb is: Any isolated brown ceiling stain (with or without associated grey mould staining) is a sign of a leaking roof. You should go down the ROOF REPAIRS journey to find out more about getting your roof leak repaired.

However, I am asked to inspect a lot of mouldy ceilings that has nothing to do with a leak.

If the whole ceiling is covered by a fine layer of mould, then it is probably not a roof leak. If there are patches of fine mould around the cornices with no brown staining – then it is just a damp room. Not a roof leak.

In my experience, if the plaster ceiling has good ceiling batts on top of it, it is much less likely to attract mould. If there are NO ceiling batts – then this is the major cause of mouldy ceilings. Some ceilings will show ‘bands’ of mould – especially around the edges of the room. I always find that there are no batts at the edges of the ceilings (because the insulator could not bother putting the last bit in due to the tight space.) when a ceiling has the mould band over the windows. 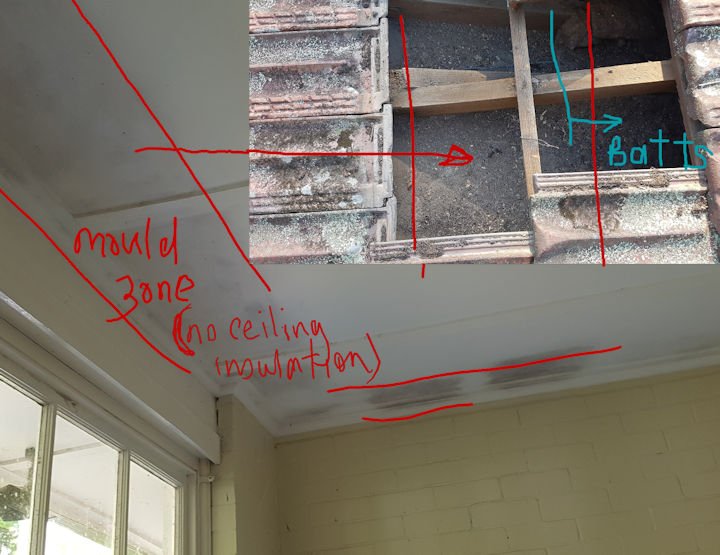 The bands of mould on the ceiling are directly below the section of roof where the ceiling insulator did not bother to install ceiling batts – because it is rather hard to reach.

An uninsulated ceiling will collect condensation because it is cold and create a nice damp surface for the mould spores.

Dampness on a ceiling is a good attraction for mould growth. In the winter time, ceilings are prone to dampness because room heating and the presence of our warm bodies send warm moist air upwards. This moist air hits the cold ceiling (more pronounced on ceilings that are not insulated) and forms condensation. When mould spores are around, they migrate to the moist environment and thrive. Very quickly, they multiply and soon you have a fine coating of mould all over your ceiling.

Some rooms are more prone to dampness. Bathrooms and bedrooms are the worst because they are more private and are often closed and unventilated.

The solution to damp rooms causing mould growth on ceilings is to make sure that you have good ceiling insulation. The insulation keeps the ceiling warmer in the wintertime and there will be less condensation. The room needs to be ventilated. And it is very important to kill off the mould effectively, remove it and apply a good quality ceiling paint.  I do not do any of these things – so find a good ceiling insulator and a good painter…

Hi mate.. i have recently had my house re roofed and i still get mould on my ceiling above the stairs.. he said it is because the insulation in the floorboards in the roof havent got enough room to breathe is this real or are they trying to pull a fast 1 because they messed up the roof and dont want to do it again for free? I got quoted 5k off them to do the roof which i thought was a bit cheap because others quoted 10k now im regretting my decision.. hope you can help.. kindest regards

I am not sure about the ‘breathing’ but…
All I know is that in my experience, most mouldy ceilings are caused by no (or very little) ceiling insulation directly above the mould areas. If the ceiling is insulated, it does not get cold and cause warm air to collect (condense) – and attract mould.

From an insulation perspective, insulation relies on trapped air to provide its insulating properties. It is not good practice to compress the insulation from its expanded state, or to have the roof element touching the insulation – as these will reduce the R rating. This may be what the ‘breathing ‘ relates to.

We have a flat roof with some sort of straw in the roofing. Due to rusting and roof sagging we have a large mouldy area 1m2 size on interior ceiling. How do we best eliminate the mould? We have just replaced the roof.

I own a single story house with A framed rooftop. The ceiling in the bathroom and one of the bedroom create mold along the edge of the cieling of the exterior wall above windows in both rooms. The mold happens in the summer and I the winter , the attic received new rake in insulation and the house has new fanfold and tyvec with new vinyl siding. This is the second time. Unsure, I am going to replace the gutter next. Any ideas let me know

Hi Rene,
Have you checked to see if the roof is leaking where the windows are?

I am on the middle floor of a three story apartment block. I have mould covering my lounge, dining room and hallway but not bedrooms or bathrooms. The mould is fist size and in a grid pattern every 30cm approx. There is a young man in the apartment above me that runs his air conditioning at what seems below zero, apparently 24 hrs. We have been experiencing extreme humidity in Cairns. I have not been running my air conditioner but have fans on 24 hours in lounge/dining and main bedroom and balcony double doors off lounge room are never closed.

I am the owner of the unit and understand it must be from condensation but do not understand why it is happening now ( the man has been in his unit for 2 yrs) and could it be ongoing if not addressed and just cleaned?

Hope you can shed some light.

Hi Karen,
I think you have identified the culprit!
It is your upstairs apartment that is making your ceiling cool.
There will be condensation because of the humidity in Cairns and also because you do not use your air conditioner to de-humidify your apartment.
You probably just need to clean your ceiling with anti-mound solution and have your air conditioning turned on. You will not get condensation if you cut down the humidity in your apartment.

I have the same along the joins of the plaster sheets in my alfresco and balcony in my new home. I have been told this is caused by condensation build up inside the roof because the builder did not put anticon lining on my tin roof and no insulation. Not happy I was not told about this. I now need to clean the ceiling and install insulation at my own cost. Anyone else been through this?

Okay I have removed all interior walls ceiling and insulation. Still having issues with this MOLD coming back. Totally new A/C system all walls and ceilings have received new insulation. Mold only in closets and bathrooms new exhaust vents even bigger than the original.
Thinking about roof turbines in three spots of house to help with this. Anyone know anything else that may be looked at??? Lost confused and going broke trying to stop this mold issue.

Find solutions with these principles in mind, and you should have no more mould.

Hi Rick,
I run a complex in Cairns Northern Beaches and one of the downstairs unit has blotches of what seems to be mould on the ceiling in the lounge/dining, kitchen and bedroom but not the bathroom, we have been told that between the upstairs and downstairs there is 20cm of concrete separating the floor from above and the ceiling below, the owners on the downstairs unit are telling me that the people upstairs are running their air cond 24/7 and that’s what is causing these blotches, I have had an air cond person to have a look and he said there is no way that running a air cond 24/7 from above would be causing the problem because of the thickness of the concrete. I have been upstairs and yes the air is on 24/7 however there is no wetness on the floor and the tiles are of the normal temp as it would be if the air cond was off. The people downstairs leave their back bedroom door open with their fan on low and in the lounge they leave the front glass sliding door open with the fan on, however that is the only ventilation they have as there are no other windows or doors, they also don’t use their Air Cond very much at all, they say this has never happened before. Could you please give your advise on what could be the cause.

Hi Jocelyn,
Mould like damp surfaces. Could be just high humidity causing the start of mould spores.
My suggestion is cleaning off the mould properly. Then run the air conditioning unit during humid days (everyday in Cairns?) – because this will cut down on humidity.
Then monitor.

I have a house in S.E. Calgary and in the main bedroom a few mold patches have appeared along the edge of the ceiling where the window above the window and in the clothes closet. Can you please give me some advice how to fix the problem if possible?

Hi Martin,
We are on opposite sides of the globe.
All I know is that mould likes damp surfaces and if you keep the surfaces dry – then mould will not grow.
Surfaces get wet mainly due to condensation.
Condensation is caused by warm moist air meeting a cold hard surface.
A surface gets cold when it is not insulated.
Therefore the key is keeping the hard surface warm by insulating against the cold outside.
Follow this logic and you will come up with a solution for your problem.