How to repair a leaking roof in Sydney?

A judicious use of roof silicone can be the way to repair a leaking roof.

Some Sydney roofers think that pumping silicone into every nook and cranny that one will find on a roof is a good way to repair a leaking roof. This repair method does NOT work.

Whilst silicone has become a roof repairer’s best friend (we buy our silicone in batches of hundreds), knowing where and how to apply this magic chemical composition is the key to a successful roof repair.

Sometimes, all it needs is a little bit of silicone applied correctly in the right place. It will stop the roof leaking the next time it rains and the wonders of roofer’s silicone climbs up the recognition ladder. No more leaks mean a roof repair done correctly – even if it just involves a squirt of this magical roofer’s compound.
Silicone can be the silver bullet -just like that one correctly placed sniper’s bullet that hits the target and accomplishes the mission.

The problem arises when the user of that silicone gun does not know where the target really is. So, instead of a single shot, a buckshot approach is taken. Spraying silicone everywhere and hoping that some of it will hit the target will result in COLLATERAL DAMAGE.

The incorrect use of silicone to fix a roof leak can lead to a worse roof leak the next time it rains. 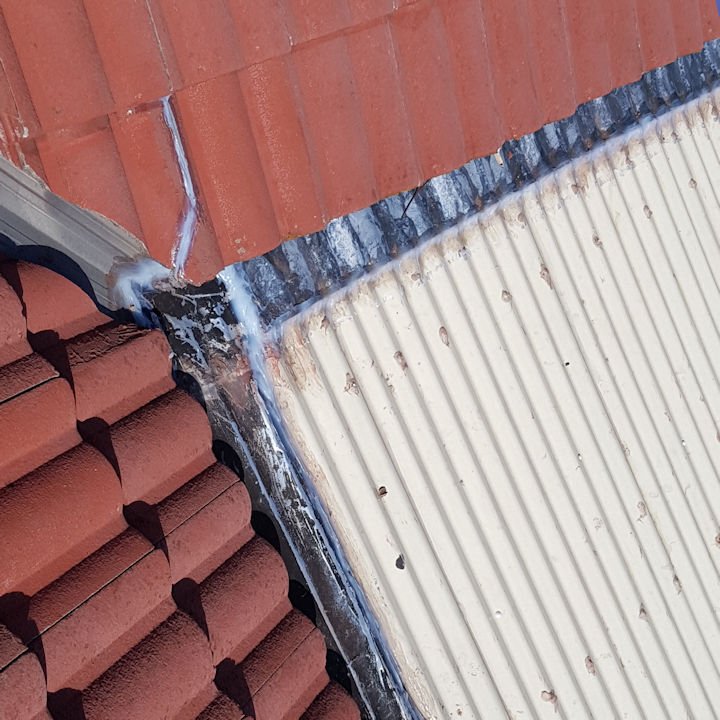 Roofers silicone can be the silver bullet to a roof repair. It cannot be used as ‘buckshot’

The anatomy of a typical roof repair in Sydney.

“There’s a hole in the bucket, dear Liza, dear Liza…”

It wasn’t a hole in the bucket that Henry had a problem with. It was a hole somewhere on the roof that was letting the rain water in.

Even though the bucket on the ceiling was doing its job, it was just a pain for Henry to keep having to empty it. There are plenty of containers in ceiling attics  in Sydney houses. It is a good temporary solution to stop damage to ceilings – but Liz was not happy with this stop gap measure.

Difficult situations like the one that Henry found himself in with the roof leak, are quite common after a rainstorm event.
Getting a bucket under the drip from the ceiling was the easy part.

It kind of went ‘downhill’ after that.

They found out who their home building insurance was with. and had to put up with the music and the recurring message that they had progressed in the queue. When they finally got a human, they were told that due to the large volume of claims, no firm insurance assessment date was available. All they were given was a claim number and to expect a call…

Fast forward 3 weeks (because that was how long it took)…

The insurance company was sending a building company to look at the damage caused by the leaking roof. The building inspector would assess the claim to determine if the roof leak was storm related.
The building inspector indicated that he was constrained by OH&S requirements from climbing onto the steep sections of the roof. But he had the latest in technology to overcome this.
The photographic DRONE.

The drone took magnificent pictures, and this was included in the insurance report on the leaking roof that was finally issued a week later. There were no holes found on the roof. There were no signs of any storm debris on the roof that may have damaged the roof. Therefore, there was no storm related damage to the roof (and the insurance company was freed of any responsibility for the leaking roof)..

But there were pictures of gutters clogged by leaves, there were roof tiles with chips at the corners. The pointing on the ridge capping showed signs of significant cracking, the flashings on the roof vents looked like they needed repair work and there was even some rust on the metal roof section of the roof.

However, these were roof maintenance issues. Not storm related roof damage and leakage matters that could be claimed under the home insurance policy.

Even though there was a hole in the roof somewhere that was causing the roof to leak, the hi-tech equipment that the insurance company used, could not find out exactly where this hole was. It only provided evidence of common roof issues. And the builder would NOT proceed with any house repairs until the hole in the roof was found and fixed.

Henry was in a “No win” bind. Liza was full of ‘suggestions’.

He got a roofer to look at the insurance report on his roof and to come up with a quote to do the work.

“By the way,” Henry told him. “I don’t think the insurance company knows whey the roof leaked during that storm. It has not leaked since when we have had light rain. Can you have a good look up there and if you see anything… maybe you can find the exact problem and fix that too?”

We don’t tell kids to grow up to be roof repairers. We tell them to get high grades and study hard to get into a profession. Something like a doctor would be great.
Really good roof repairers are very scientific and professional. It can be like roof surgery to find out what the cause of the roof leak is – then to come up with a solution to fix the situation. So, they can be excused when they call themselves doctors.

Well, this roofer who came out to see Henry (Liza was in the background – just checking) fancied himself as a roof doctor. (the fact that it was chilly, and he had a coat on almost made him look like one).

“I know what the problem is.” He said to Henry. “Nothing that a bit of flashing and silicone won’t fix”.

“By the way, the insurance company is right, I will also have to do a lot of maintenance roof repair on your roof…”

Caught between the ‘doctor’ and Liza, all Henry could say was “When can you start?”

The ‘doctor’ fixed the roof and got paid handsomely.

The insurance company sent the builder back to replace the ceilings and the kitchen cabinets in the kitchen.
… And it the weekend after they finished the work, it rained heavily.
“… There’s a leak in the ceiling dear Liza, dear Liza…”
The nightmare was about to go full circle.

The insurance company half relented.

They stood their ground that they were not going to fix the ceiling twice because the leak was still a maintenance issue. But they agreed to a ‘pay-out’.
Take this money and go away.

The roofer came back and a lot more roof silicone was used.
When it leaked a third time, the solution was “…the roof was not built properly in the first place. That is why it is still leaking. You will need a new roof. And that part is not under the repair warranty.”
Somehow, neither Henry nor Liza wanted to see this roofer ever again. But what was the next step in this ‘deadlock’?

Liza had to take matters into her own hands (no, she was not going to strangle poor Henry). She went surfing on the internet.

She found The Roofing Professionals Westside website. An hour later (this was what it took to read up what was on the website and to watch a few youtube videos), she reached out.. 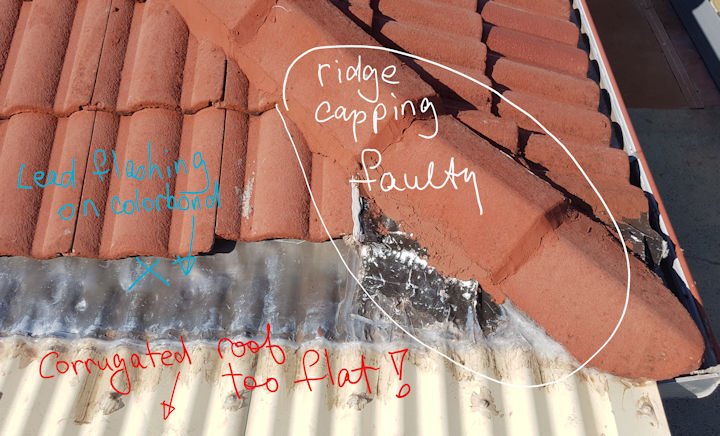 Silicone is not the solution to fixing the faults on this leaking roof. The solution is a roof replacement.

Another roof repair – just like the other thousands on our database.

We look at leaking roofs every day. It is a collective nowadays because I have just simply run out of capacity. I have helpers.
Geoff is one of my best.

Henry was happy to take a back seat this time. Liza told Geoff the full story of her roof.
It took a while.

What Geoff immediately found on the roof as he got up the ladder and surveyed the situation, filled him with an element of disgust. It is difficult to diagnose the cause of a roof leak under the best of circumstances, but when he found roof silicone used to stick ‘everything’ together, his opinion of the average roofer doing roof repairs in Sydney (even one who professes to be a doctor) went down a couple more notches.

For Geoff, it became abundantly clear why the roof only initially leaked during the storm. Also, why the drone could not see any holes and any obvious storm related damage. There was also a clue to why the roof leaked worse after the initial and subsequent repairs.
Also, the solution to stopping the roof leak was blatantly obvious (since he had meticulously translated the leak in the kitchen onto the roof above and locked into a location).

The leak was located at the base of the roof valley that flowed onto a flat corrugated colorbond roof. The roofer who installed the metal roof obviously thought that a lead tile flashing was better than a colorbond one. The compound effect of a flat corrugated roof, a totally non serviceable lead tile transition flashing, and an excessive amount of water rushing down the valley had to make the roof leak.

When the roofer (in the lab coat) came up with the solution of applying silicone to very conceivable gap on the roof, this just made matters worse Water got trapped by the silicone and flowed backwards into the ceiling cavity. And this did not need heavy rain to create this effect.

Seeing badly repaired roofs is an everyday event for Geoff. But he still gets “pissed-off’ by what the sub-par roofers try to get away with.

I keep consoling him by saying that there is this vast field of leaking roofs in Sydney that keeps us in business. I agree with him that no homeowner should have to put up with sub-standard roof repairs. They deserve better.
We don’t really need to repair (again) those blatantly bad roof repairs that we see in our travels. Because even if the standard of roof repairs in Sydney is ramped up quite a few notches by a new generation of good roofers, we will still do good business.

Geoff had mixed news for Liza.

He firstly told her that the only thing that the roofer (who called himself a doctor) was correct in… was finally admitting that the roof was incorrectly built. If he had said this first before he confidently reached for his silicone gun, he would have done the right thing.
The only way to fix the leak properly was to totally change the leaking roof and its associated flashings. This would have been the more expensive option initially and Henry and Liza would have baulked at it.

Now that Geoff was emphatically locked into a replacement roof as the only viable option, Liza realised that this was the best advice so far.
Better to pay more for a proper roof than bear all the pain of a roof that leaks and defies all attempts at a successful roof repair… 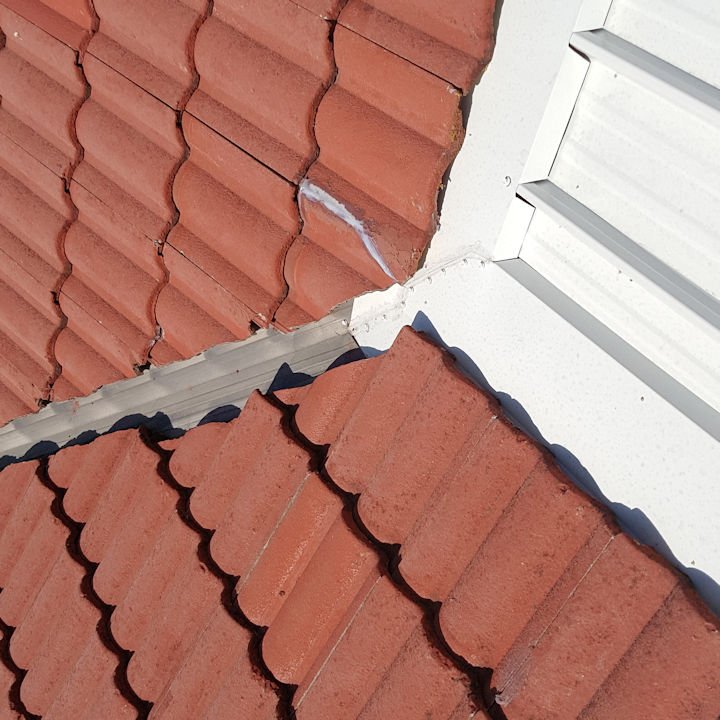 A properly designed and installed roof will stop the roof leak

The rain started on Friday.
Sydney got 130mm of rain on Saturday. It kept raining on Sunday. Then it continued to Monday.
Tuesday morning came around…
It kept on raining.
Henry had made sure that he had buckets in the roof attic. But he never needed to use them.
Liza had that nursery song playing in the background all weekend. “There is a hole in my bucket……”
It did not worry Henry anymore.
The roof was good. No more leaks.