Why fix it if it ain’t broke?

Tom had an old  tiled roof.

It happened to be old concrete roof tiles and he often wondered about its age and whether it was time for a new roof. Initially, it was a low priority item for him because he had just spent a few bucks on a new kitchen.

… Until a storm showed up.

The kitchen ceiling started to drip. It was an emergency but there were no roofers to be found.

“… it is against Occupational Health and Safety regulations to send a roofer up on a wet roof in windy and wet conditions…” – was a typical response.

Only the SES could help (apparently they worked under a different set of laws?).

“ An old dried up tree branch fell off the back gum tree. It cracked a couple of roof tiles. We have put a tarp over the area and you will need to get a roofer out when the weather gets better…” The SES guys were great.

Storms keep roofing crews busy – and it was a good two weeks before a roofer was able to peel the tarp off and take a look.

“…Yep. A couple of cracked roof tiles. They are ‘Boral Windsors’. Bloody hard to find replacement for these now since Boral stopped producing Windsors a few years back…

Lucky for you I have about 5 in my yard”

This was the good news.

The roofer had more to say….

“ You will need more work on your ridge capping because the broken tiles are directly under the ridges… Also, there are quite a few loose ridges. Maybe the SES or just a maintenance thing…

Time to make an executive decision.

For Tom, it was decision time.

He had a healthy balance on his line of credit.

The roof showed multiple dips (maybe because the roof tiles were too heavy?)

The roofer had said that if there was sarking under this roof tiles, then maybe it would have kept the kitchen dry.

He was after a roof that could withstand a falling branch. Looked good and straight. Had less maintenance issues …and a bit cooler.

Initially, he was looking for a new replacement tile roof. Then he read all the talk on the internet about colorbond roofs.

He Googled ‘replace tile roof with colorbond roof’…. And up popped a whole page published by a roofing materials supplier called ‘No 1 Roofing’.

All the pros and cons of tile vs colorbond roofs.

Tom made a decision. It was too easy…

It was going to be a new colorbond roof!

… Now, all he had to do was find a good roofer.

One day…. He was going to be able to run out in his pyjamas and admire his new colorbond roof. His old terracotta tiled roof looked crap, the tiles were very fragile. And the look of the tiles did not match with the other metal roofs that were hanging off it…

That was Terry’s dream.

When roof tiles just don’t work on a roof…

“… it is just criminal how builders and roof tiles get away with their ignorance and laziness about where tiles just don’t work!” – my roofers regular rant.

It is a fact that most roof tiles struggle to keep the heavy rain out when they are laid at anything less than 20 degrees.

Roof tile manufacturers say that putting sarking under their tiles will stretch the minimum tile roof slope to as flat as 15 degrees. If you read between the lines, this reads: “We know that the tiles will leak – but the sarking will catch the leaking water and carry it to the eaves. Hopefully, no water will reach the internal ceilings…”

… And they are mostly right.

The battens that sit on the top of the sarking, goes through hundreds of wet/dry cycles and start rotting. The roof tiles lose their support and collapse to a flatter position and cause more leakage. This is when water starts dripping onto the ceiling.

When it comes to roof pitch versatility, Colorbond metal roofs come out the clear winner over roof tiles. You can build a colorbond metal roof from 1 degree to a 90 degree pitch. You just cannot do it with tiles.

Some tiles are better than others…

Terracotta tiles are generally better at handling the lower pitches. The interlocking upstream edge will prevent water from overflowing the top edge of the tile.

Concrete roof tiles do not come with any ridging on the upstream edge. Water will run over the top edge as the roof pitch dips below 20 degrees.

The flat profile concrete tiles tend to be worst. They leak everywhere…

…. And then you have leaves.

But they drop leaves on the roof.

Leave clog up the water courses of roof tiles and block the natural flow of water down the tiles (especially flat concrete tiles).

In our many years of replacing tile roofs with colorbond roofs, we consistently come up against the two main enemies of roof tiles.

So when you are considering a tile roof, you need to take these into account first. You may end up going with colorbond.

I often tell people that I am extremely biased towards colorbond – BUT they need to take it with a grain of salt because we only do colorbond roof replacements.

Of course we are biased.

The No 1 Roofing post I mentioned earlier is an independent view about replacing tile roofs with colorbond. It does have a lot more information about the topic than I have covered above.

Pop over there for a read: http://www.no1roofing.com.au/replace-tile-roof-with-colorbond/

Then come back and make contact if you are thinking of a colorbond roof replacement.

How to cope with a leaking ceiling?

Eventually, the rain will stop and you can find a roofer to fix the leak (no rush – because roofers are always busy after it stops raining)).

You can try the SES – but they will take a while to get to you and if they throw a tarpaulin over your roof – they can cause more damage to your roof.

The reason people stress out when the ceiling is leaking is just the thought of the damage. If you can just let the rainwater pass through the ceiling and have a container to catch it under the ceiling – then there will be a minimum of damage.

Just go with the flow – not against it.

I get a lot of enquiries through my contact form where homeowners make a mention that the roof leaks only during heavy rain. In my experience, roof leaks can be separated into 3 categories: The roof leaks every time it rains; The roof only leaks when it rains heavy; Only […] Read more »

Bluescope makes blank coil for roofing manufacturers in several thicknesses. People use two ways to describe the thickness of their roofing material: TCT (Total Coated Thickness). If you were to put a measuring calliper on the roofing sheet, this will be the reading that you will see. It is the […] Read more »

Pair a lemon with a car and you get something unpleasant. As a roofer, lemon roofs are just as foul and I just see too many of these shocking roofs being installed for unsuspecting homeowners.Most days, I shake my head when I climb on a roof in Sydney. The faults […] Read more »

The most common reason a homeowner wants a roof repair is when there is a leak happening. Sometimes, homeowners are more pro-active and want their roof repaired just in case there is a future problem brewing. But this is the minority. So, how do we approach our leaking roof repairs? […] Read more »

There is no excerpt because this is a protected post. Read more »

Leaking chimneys. Chimneys are one of the major areas on a roof that are prone to leaking. A chimney breaks up the normal construction of a roof and this demands good flashings around them … so that the roof remains waterproof. On a typical metal roof to terrace style buildings, […] Read more »

Even new roofs leak. We frequently get called out to do roof repairs on newly installed metal colorbond roofs. This is when the house owner has given up on trying to get the roof installer to come back to fix the leaks. The leaks are usually quite difficult to track […] Read more »

The most common reasons why roofs only leak during heavy rain are: • No sarking to catch leaks driven in by heavy rain • Leaking low pitched tile roofs with sarking 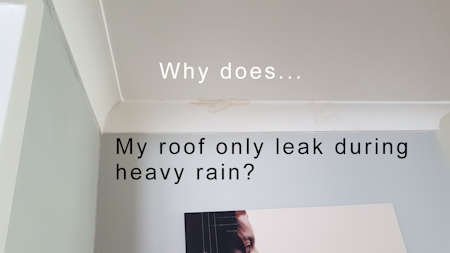 Colorbond Vs roof tiles…. Is Colorbond BETTER than tiles for your roof replacement?

Have a flat roof? – then you should know this 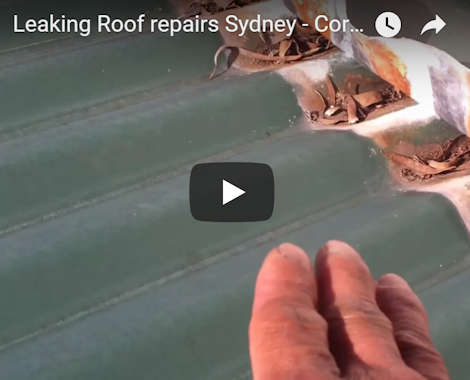