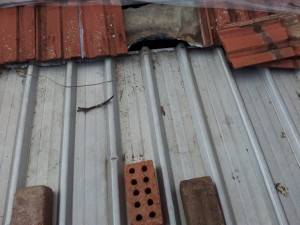 A common roofing configuration in western Sydney is the main tile roof followed by an add-on at the back, which is a flat metal skillion roof.  These are also common in the southern suburbs of Sydney and there are a bit less in the Eastern and northern suburbs.

This configuration usually gives the most economical solution to increasing the living area of an existing house.  Maybe this is why there are more metal skillion roofs in Sydney’s western suburbs. The roofing system used is usually fine if it is put together by a competent roofer. However, many of these (especially in the budget conscious Sydney western suburbs) are built on tight budgets and the builder or even the owner ends up installing the roof. This combination can be deadly with leaks appearing fairly quickly and requiring a roof repair that could have been avoided.

A lot of enquiries I get about leaking roof repairs in the western suburbs of Sydney involve something to do with the joint between the tile and metal skillion roofs. Most roof leaks appear at roof joints and the tile to metal joint can be tricky to install and repair.

Compound this with added run-off from the catchment of the tile roof upstream, and you get a lot of water concentrated at the joint between the tile and metal skillion roof. So if this joint is not detailed correctly, water will get into the roof cavity – causing leakage problems – and a good sized roof repair bill!

…And the result is a massive reduction to the water carrying capacity of the metal roof sheeting and water leaks at the upstream joint.

The video below shows a typical flat metal skillion roof in the “Trimdek” profile. There is no proper transition flashing and a lead strip is used instead. But this is not the main problem. The upturns are only ‘half done’. Perhaps the correct turn up tool was not used , or not used correctly.

Usually this leakage is due to the joints between those tiles and metal sheets.