Zincalume roofing gets an update to AM125

Around mid 2013, Bluescope announced that their old zincalume was going to be replaced by their new (Next Generation) ZINCALUME. We are now seeing the new zincalume branded products coming from our suppliers.

What is the Next Generation Zincalume?

For the technically minded, AM125 means that magnesium has been added to the zinc/aluminium coating and the coating thickness has been reduced. In this case, less is more – as the new coating offers better ‘self protection’ from cuts and scratches. It also means that less materials are used to form the coating – therefore better for the environment (from the manufacturing view point).

For the rest of us, it just means that our roof will last longer. The New Generation Zincalume has added 6 years to its  warranty (up to 36 years now).

And the best thing is that it does not cost any more ….yet. The Next Generation is ZINCALUME® steel AM125 has been rolling out of manufacturer’s factories for a few months now with little fanfare because they have not touched the price.

If you want to see if you are getting the next generation zincalume on your roof, just turn the flashing or roof sheet over and you should be able to see the Bluescope stamp like on the image below: 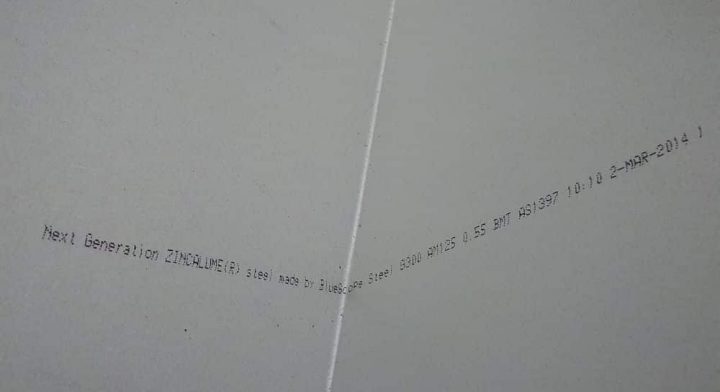 The current zincalume AM125
What does the Next Generation Zincalume do for Colorbond steel?

Colorbond is just ‘factory painted’ zincalume steel. As Bluescope has run out of the old zincalume stock, all its new colorbond coils are painted ZINCALUME® steel AM125.

This means that Colorbond also has another 6 years added onto its warranty.

What does the Next Generation Zincalume do for Colorbond Ultra steel?

I am still unclear how Bluescope will position its Colorbond Ultra which was originally designed for use near marine environments.

Now that its standard colorbond steel is based on the next generation AM125 technology, Bluescope has started to provide warranties for the standard product right next to the sea. This makes the very expensive Ultra cousin ‘out on a limb – searching for a reason for its existence’.

Personally, I think Bluescope has very little reason to keep its Ultra range on the market – since the next generation product seems to be far superior than the base that the Ultra range is built from (a thicker old generation zincalume coating)…

… I guess time will tell.

In the mean time, enjoy the longer life of the Next Generation zincalume and colorbond products.

Does this new Zincalume condensate inside.
Does water set on the outside and drip inside, or is it water proof. Do I need to insulate the roof?

Only the composition of the protective layer for the steel has changed. Everything else remains the same.
Installing a building blanket under the zincalume roof is still highly recommended to prevent condensation.

I work at a laboratory where we perform tests on roofing sheets typically against ASTM standards for clients. I have now come across this new metallic coating and would like to find out what is the nominal composition of the metallic coating, i.e. nominal percentages of zinc, aluminium and magnesium? I take it from the AM125 designation, the coating mass of the coating is 125g/m2?

Hi,
You are correct,
AM125 is coated both sides with a minimum of 125g/m2 of Aluminium/zinc/Magnesium.
I don’t know the actual percentage of each metallic compound that the coating is made up of.
I am more interested in the fact that tests have shown that the AM125 is more corrosion resistant (on cut edges) that the older zincalume Z150.