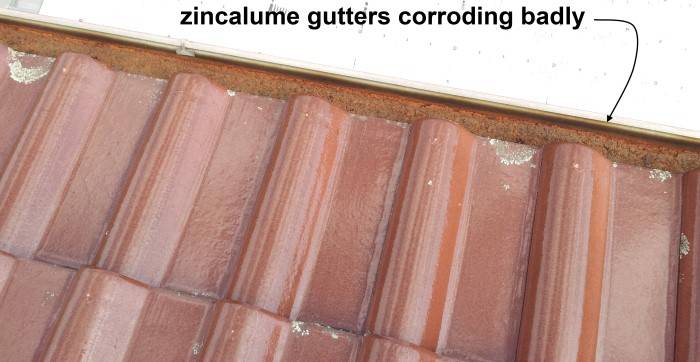 It is a waste of time and money choosing zincalume over colorbond guttering.

I have a ‘thing’ against trying to save money on guttering materials.

I am referring to the practice of specifying zincalume gutters instead of colorbond guttering. Sure there will be a price savings between the two – but at what cost?

There is no question that colorbond gutters last longer than zincalume ones. How much longer, I can’t tell you…. But what I can say is that I have pulled out far more rusted zincalume gutters than rusted colorbond guttering over the past decade or so.

And the cost to replace guttering is not cheap.

Typically, a suburban residential roof will have about 50 to 60 metres of guttering and cost around $3000 to replace properly. The material component of the price for replacement guttering to a typical house is quite small. It is the labour that is expensive.

With a price difference of about $1.50 between colorbond and zincalume guttering – you pay only $85.00 extra for choosing colorbond guttering.

With the additional cost of  colorbond fittings, the total price difference to the gutter installer is only about $150.00.

So, if the choice is between $3000 for new  zincalume guttering and $3150 for new colorbond guttering… I know which one I will be choosing!

And I have not even mentioned the “free” gutter paint job that you receive if you choose colorbond guttering!

zincalume guttering is a total waste of time in my opinion!

I am currently working on a project in the Pacific, providing rainwater to communities that are within 100m of the ocean. People point out examples here of colorbond rusting where zincalume hasn’t. ANy ideas as to this?? (I have specified colorbond and am worried because locals are saying it is the wrong spec)

Hi Mary,
Firstly, what the locals call zincalume may be galvanised sheets.
Secondly, colorbond is purely zincalume with additional coats of paint. So, there is no reason where bare zincalume can be longer lasting than colorbond.
Thirdly, the environment, pitch of roof, and installation detailing can make a lot of difference.
You can stick with colorbond as the best choice and if it is near the sea – then colorbond ultra should be specified.