Roof repairs with a long warranty is what most homeowners want

Sometimes, homeowners are more pro-active and want their roof repaired just in case there is a future problem brewing. But this is the minority.
So, how do we approach our leaking roof repairs?

A guaranteed repair to a leaking roof – what are the challenges?

Initially, I was scared.

The risk of losing money on a roof repair job was quite substantial. A few losing jobs and I could be going broke!

So I understand the situation of many roof repairers starting off a business repairing leaking roofs. They are reluctant to offer any sort of firm roof repair guarantee that would jeopardise their livelihood.

There is nothing like experience to hammer in life’s realities.

After tens of thousands of successful leaking roof repairs under our belts, I can confirm that sometimes we lose money on a job. But losing money on a few roof repair jobs and going broke are two quite independent outcomes.

Sometimes, we underestimate the work involved in fixing a roof leak. And we pay for it.
…But we learn from those jobs and these experiences eventually pay us back big time!

Why is the roof leaking? 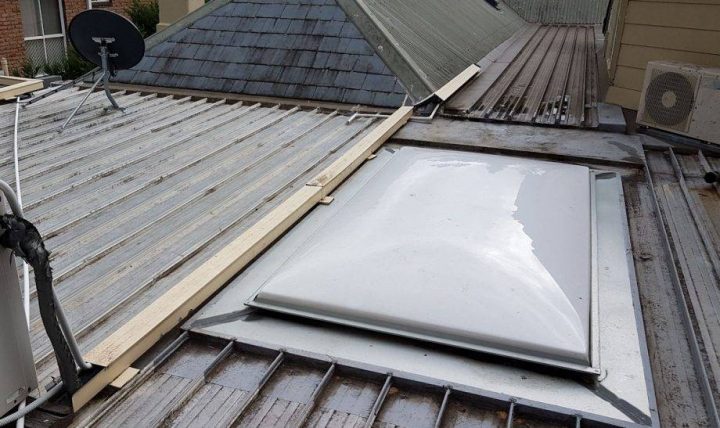 Picture this roof that was leaking…….

Skylights and flat metal roofs tangled up with a slate roof. If this was not enough of a challenge, there were multiple leaks. And to top it all off, a roofer had tried many times before to fix the leaks – unsuccessfully.

There were at least 5 different reasons for the leaks that we could make out. The home owner was close to giving up. He was contemplating new replacement roofs.

When I told my roofers that I had taken this roof repair job on, there were a few ‘dropped jaws”…
This was going to be one big challenge.

My guys fixed up all our ‘known’ reasons why the roof was leaking. And they waited for the next big rain.
“… still a couple of small leaks coming through” was the response.
Back again they went. More brain power to figure out where the ‘unlikely’ sources may be.

Then we had the long dry period.

“…still leaking” was the response. Back we went.

Then heavy rain and hail.

Then came the above confirmation of a dry home…. At last!

We can always figure out where a leak is coming from. It just takes a few times if there are multiple sources contributing to one observed leak.

How do we fix a roof leak?

With a multitude of roof repair options at our disposal, we know how to fix any roof leak…. But only once we have figured out where the source of the leak is.

The HOW? was once a problem.
It is now totally replaced by the WHY?

“Can of Worms” roof leaks 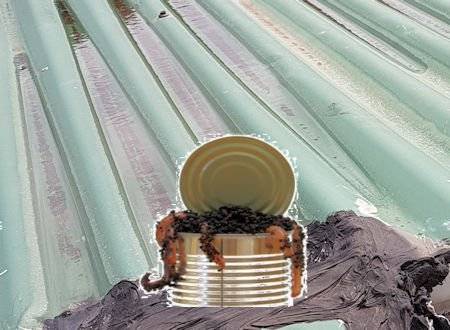 Repairing flat corrugated roofs can be a can of worms

“You just wouldn’t open a can of worms”

… Just as we would not open up a roof that is obviously a ‘can of worms”.

But the problem is that our perception has moved to a point where we think we can fix ANY roof leaks.

So, we often open up roofs that are ‘cans of worms” . Somehow, my roofers always manage to contain things and very little of the worms have escaped!

Roof still leaking after repair – how long is the warranty?

If a roof repair is shown to be successful after the first big rain event, then chances are that it will not leak for years to comeJack Yuen

My roofers ‘crack up’ when they hear of roofers giving roof repair warranties that are measured in months. This is because my roofers measure their roof repair work in years. We don’t rely on taking deposits for roof repair work and not going through with the full commitment for the years down the track.

I like the number 7
So, we simply offer a 7 year warranty.

We have been around for decades –so there is a likely chance that we will be around for another 7 years.
Even though the typical marriage struggles to get past the ‘7-year itch’!

What else can go wrong with a roof repair?

But we have found over the years that if we keep moving forward, there are lots of people who like what we do and support us well along the way.

had new roof fitted paid $8,800 but leaks down side of house after heavy rain good view plumbing maintance Canberra act said I never quoted for that? never get hold of him changed his mobile email no contacts . told stop harassing him . he said far as im con cerned the job completed . I will do it but u have to pay more for it gave 3 years warranteed on work? then told warranteed is only on the products?

Sorry to hear about this.
Unfortunately, it seems to be a fairly common thing with the trades…